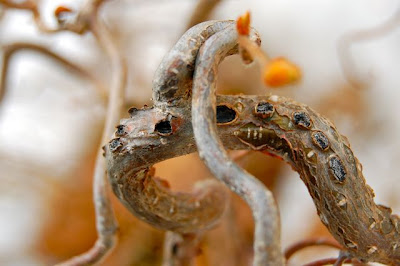 Run out right now and inspect your corkscrew hazel shrub (Corylus avellana ‘Contorta’) for bumps like these. If you see semi-regular, black cankers along the stems (like I did), your hazel has Eastern filbert blight (Anisogramma anomala). If left to its own devices, this will kill the branch, spread, and eventually kill the hazel tree or shrub.

Pruning out infected wood well below the cankers, before leaf buds break (now!), is about the only way to treat this unsightly mess. Here are more details from Oregon State University and from Cornell [PDF].

Filbert blight is now a major problem for North American hazelnut growers who also grow C. avellana, the European branch of the hazelnut family. It’s a stronger producer but more susceptible to blight than our native American hazel. For nut growers, filbert blight is an economic catastrophe. For ornamental gardeners like us, it’s just a sorry pain in the neck. I suspect the blighty conditions that took their toll on our tomatoes for the last couple of seasons may have been just right for this fungus, too.

Once the leaves unfurl, it’ll be next to impossible to see anything amiss on the branches. So look closely now and prune out and destroy any affected branches before the blight can spread further.

The contorted hazel is highly susceptible, so even though you pruned it, I would bet that it pops up again. You will see the stromata developing in July and August.  It can not reinfect other hazelnuts until the next spring though as the EFB cankers take a while to mature.

There is a EFB-resistant contorted hazelnut with purple leaves now available.  It is called ‘Red Dragon’.  It is a great plant. ‘Red Majestic’ is another purple contorted variety available, although it is highly susceptible to EFB like the original contorta. Red Dragon is available from a couple Oregon nurseries, but it is very expensive since it was just released last year and few plants are available.

Helen Battersby is a gardener, a writer, a power-walker and a garden coach, not always in that order!

On ruthlessness, or lack thereof

The best way to grow tulips