Not everyone has your passion for dead leaves

Not everyone has your passion for dead leaves.

What is it about Canadians and dead leaves? The spurning of them, I mean. To my utter horror, I’ve just discovered that my new downstairs neighbour has carefully raked and stuffed into plastic garbage bags every single decaying leaf in the backyard of our shared garden.

Imagine smoke coming out of the top of my head at a furious rate.

This is not the first time. There was another neighbour. Another rake.

And, as it was the neighbour’s mother who was the actual culprit it made things stickier. But more of that later.

Few things make my blood pressure rise instantaneously – I mean that instantaneous clutching of your insides when something has been done that Shouldn’t Have Been Done. I don’t suffer from road rage, and generally only mutter sarcastically when someone does something idiotic in most arenas of life. The garden is different, however: when I saw those bags filled to bursting— with leaves I had been tending and amassing for years—I was fully ready to viciously throttle the perpetrator.

I admit I have become a bit nutty about leaves.

The more rotten and closer to becoming leaf mould, the better. But I as I garden in the city on practically pure sand I have good reason to be. My garden was once a beach of Lake Ontario. Some sort of geological happening, details of which I am unclear, caused the lake to recede further and further out and the beaches to remain behind.The end result is that many east-end gardens are pretty much pure sand, and mine is one of them. And I mean, real sand. Yellow, fine sand.

Few things are actually happy growing in it. There’s nothing to eat. Water drains straight through. It’s a hard life, or a slow death in many cases. Yet, if enough organic matter lands on it and rots, becoming humus, sand can become soil. I’ve been doing my part in my little postage stamp garden to help this along. Soil does happen. Eventually. 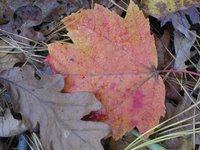 That, at any rate, was the alchemy I was trying to practice by allowing leaves to settle on my garden for years. Between earthworm action, (more on earthworm love later) and natural leaf breakdown, the soil is beginning to improve. By grabbing leaves and pulling them down into the soil, the worms create soil. The more leaves sitting on the surface, the more earthworms, and the better it all works.

I look back to the halcyon days in my garden before my first “Leaf Incident”. The days when my fellow tenants cared not a fig for the great outdoors. Their only garden requirement was a flat place to put a barbecue. They saw me puttering about back there and usually paid me no heed, except to say something like, “Looks like a lot of work!” My leaves sat, my earthworms ate, and all organic matter quietly rotted.

Now I will tell you how my first Leaf Incident unfolded.

Looking over my balcony one day, to my utter shock, where once my garden nestled in a cozy bed of leaves, I saw a barren and leafless firmament. I saw bare soil. I saw the Tell Tale Rake. I saw the green bags a-bulging. It swam before my eyes. Who…what….how? Then, with my heart a-pounding, my hair on fire and my brains spilling out of my ears, I cornered my neighbour and said, with as much restraint as I could, “Why, Why ? The leaves! The leaves! What h-happened?” 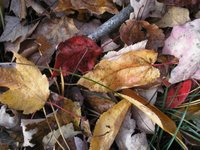 Looking at me a little puzzled, she told me her mother had raked them, believing herself that this was one of the most sensible acts anyone could have done.

“But, but, but,” I stammered “I meant for the leaves to be there, I put them there on purpose. It’s for the Soil! To help things grow!”

The tenant apologized on her mother’s behalf and told me the story. Her mother was visiting her from Nova Scotia, and while her daughter was at work had wanted something to do to help. She had looked outside at the leaves on the garden and found them…..messy. “Nobody wants dead leaves cluttering up the place.” She thought, “It’s lucky I came along!” She grabbed the rake and hoved to it. And an hour or so later, there was nothing but bare earth, a rake, bulging garbage bags, and a well exercised mother.

Well this points out how different people’s mindsets can be. To this fine lady leaves equalled filth. While to me, leaves were life itself in the making. 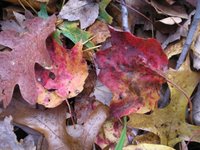 I’m happy to say, this point of view re: leaves does seem to be altering a bit, at least officially. The garbage men won’t even pick leaves up in green garbage bags any more. Unless they are earmarked for composting, and in special paper bags. No, no more leaves are going to landfill. In theory.

But even with this welcome change, I still don’t want my leaves raked up. My leaves aren’t going to go to some community compost heap. Not my leaves. I want them right there where I can keep an eye on them, thank you.

Sarah Battersby is a designer, writer and teacher who regularly hacks away at forest of lilacs and sumachs in the country. She wishes she’d never planted that goutweed.